This is the second of two web sites intended to provide insight into chemical concepts.  The first site entitled ATOMIC MASS and ISOTOPES:  INTERPRETING THE NUMBERS [1] focused on atomic mass and the information that can be gleaned from its value.  This utilitarian knowledge is not commonly discussed in texts but provides useful insight into the isotopes of each element and is worthy of students’ attention.  This paper continues on with the theme that students can often gain valuable insight into chemistry concepts by thinking beyond the box or reading between the lines.  Applications to oxidation numbers, formal charges, molecular polarities, climate change, pH, the checking of calculation results and the correcting of errors are presented. John Packer, et. al. [2] and David DeWit [3] have previously presented examples on some of these topics.

The last equation depends not only on DEN but also on values of EN so values cannot be caluculated with only DEN values.

Use of the graph below provides a visual method for determining the % ionic character but demonstrates that there is substantial uncertainty about the value.  Many sources claim that an electronegativity difference >1.7 can be interpreted to mean that the bond is ionic.  Between 0.5 to 1.7 the bond is supposedly polar covalent and <0.5 the bond is non-polar covalent.  Note, however, that CsI, LiCl and HF have similar electronegativity values but the reported % ionic character varies from about 45 to 74%.

The formulas above were developed for use with the Pauling electronegativity scale.  However, three other scales have been found to correlate better with bond properties. [4]  For the purposes of this web site, when EN values are needed, the Allen scale will be used.  Problems still occur as carbon-sulfur and carbon-iodine bonds behave as if they are polar covalent with a partial positive charge on the carbon but these experimental observations are contradictory to DEN values. Unlike the Pauling scale, the Allen scale does appropriately have the electronegativity of nitrogen higher than for chlorine.    This is consistent with the observation that nitrogen participates in hydrogen bonding but chlorine does not.  Electronegativity is not the only parameter that needs to be considered when determining the % ionic character.  Size of the ions and other variables are also important and not necessarily taken into account by the EN value.

Ti(NO3)4  It needs to be recognized that nitrate has a charge of -1.  For the titanium x + 4(-1) =0 with x or the oxidation number of titanium = 4.  Thus the name would be titanium(IV) nitrate.  For the nitrogen, see the next example.

The periodic table below give very approximate values of the oxidation numbers for the elements.

The formal charge method assumes that the bonds are 100% covalent with bonded electrons equally shared by the two partners.  In general, everything else being equal (e.g., octet rule is satisfied), the structure with the minimum number of formal charges will be favored. The formal charge is calculated from the following formula:

Q3.  In hypochlorous acid, would the H be expected to be bonded to the O or the Cl?

The choice for the best model is between the 1st and 2nd and bond lengths and energies indicate a triple bond is present.  The  very small dipole moment for CO is also consistent with two competing factors.  The formal charges indicate the dipole should be from oxygen to carbon whereas the electronegativity values favor the dipole going from carbon to oxygen.  These two factors come close to canceling.  There is some debate about the direction of the very small dipole but it is probably from oxygen to carbon.

As noted, the solvent table has been arranged according to increasing relative polarity using a solvent spectral shift measurement.  Solvent polarity much like electronegativity is not a well defined property.  In addition to the relative polarity values used above, dipole moments and dielectric constants are also used to rank polarities.  The table shows that there is a correlation of the solvent shift polarities with dipole moments and dielectric constants with some notable exceptions.

The best predictor of solubility is probably "like dissolves like."  Because many variables affect solubility, the best way by far to determine solubility is to refer to the literature or experimentally determine it.  There are some trends that are predictable.  For the series 1-octanol, 1-heptanol, 1-hexanol, 1-pentanol, 1-butanol, 1-propanol, ethanol and methanol, the table shows a consistent trend towards increasing solubility in water as the number of carbons decreases.  One way to view these molecules is to consider them to be composed of two parts, a non-polar carbon chain and a very polar OH group.  When the carbon chain is long, the non-polar properties dominate and the compound has low solubilty in water.  As the carbon chain shortens, the polar hydroxy group becomes the dominating part of the molecule.  The three alcohols with three carbons or less are all miscible with water.

Q6.  Using solubility differences only, suggest a method for distinguishing between: a.  PbCl2 and BaCl2 b.  BaSO4 and ZnSO4 c.  acetone and hexane

Q7.
a.  The molecular mass values for hexane and 1-pentanol are similar.  Suggest a reason that the b.p. of 1-pentanol is higher than the b.p. of hexane. b.  The boiling points of methane, water and hydrogen iodide are -162oC, 100oC, and -35oC respectively.  Suggest an explanation for the values.
In addition to the use of molecular polarity for the prediction of solubility, polarity is a very useful property for the determination of the course of organic reactions.  Many reactions are initiated by the attack of a nucleophile or and electrophile.  Where should we expect a nucleophile to attack but on a site that has a partial positive charge.  Common examples are carbons bonded to a leaving group such as a halide or protonated alcohol or to an sp2 hybridized carbon that has a double bond to an oxygen such as a carbonyl or carboxyl group.  Electrophiles or species with positive or partially positive charges should be expected to attack regions of high electron density such as an aromatic ring.  Examples of attack by nucleophiles on carbons with partial positive charges are below.

Climate change and pH. Climate change is one of the most daunting challenges currently confronting all life on earth.  The first step in the effort to overcome the challenge is to significantly increase climate change science literacy.  Thinking about the magnitudes of concentrations can provide valuable insight.  Most people including those with strong opinions on both sides of the global climate debate cannot name the three most abundant gases in dry air.

Q8.  Name the 3 most abundant gases in dry air.

Even if people notice the units of ppm, most do not realize that these values translate to very low concentrations.  While the consequences of the 46% increase in CO2 atmospheric concentration on the global climate are difficult to predict with high certainty, understanding that human activity has changed the content of the atmosphere does help when trying to explain the reason for concern.  Unfortunately, scientific studies of the effects of increasing CO2 and other Greenhouse gases are consistent with an alarming increase in global air and water temperatures with severe consequences for life everywhere.  For a Powerpoint presentation on climate change, please visit reference [8c]

pH is another measurement that does not receive sufficient attention with regard to interpretation of its values.  When it is stated that neutral aqueous solutions have a pH of 7, how many think about how low the acid and base concentrations are in neutral water.

Q11.  How much sodium chloride is needed to prepare 1 L of 1x10-7 M NaCl and is it possible to weigh the resulting quantity.

Q12.  Why does the pH of freshly distilled water drop below a pH of 7 after sitting for a few hours open to the atmosphere? 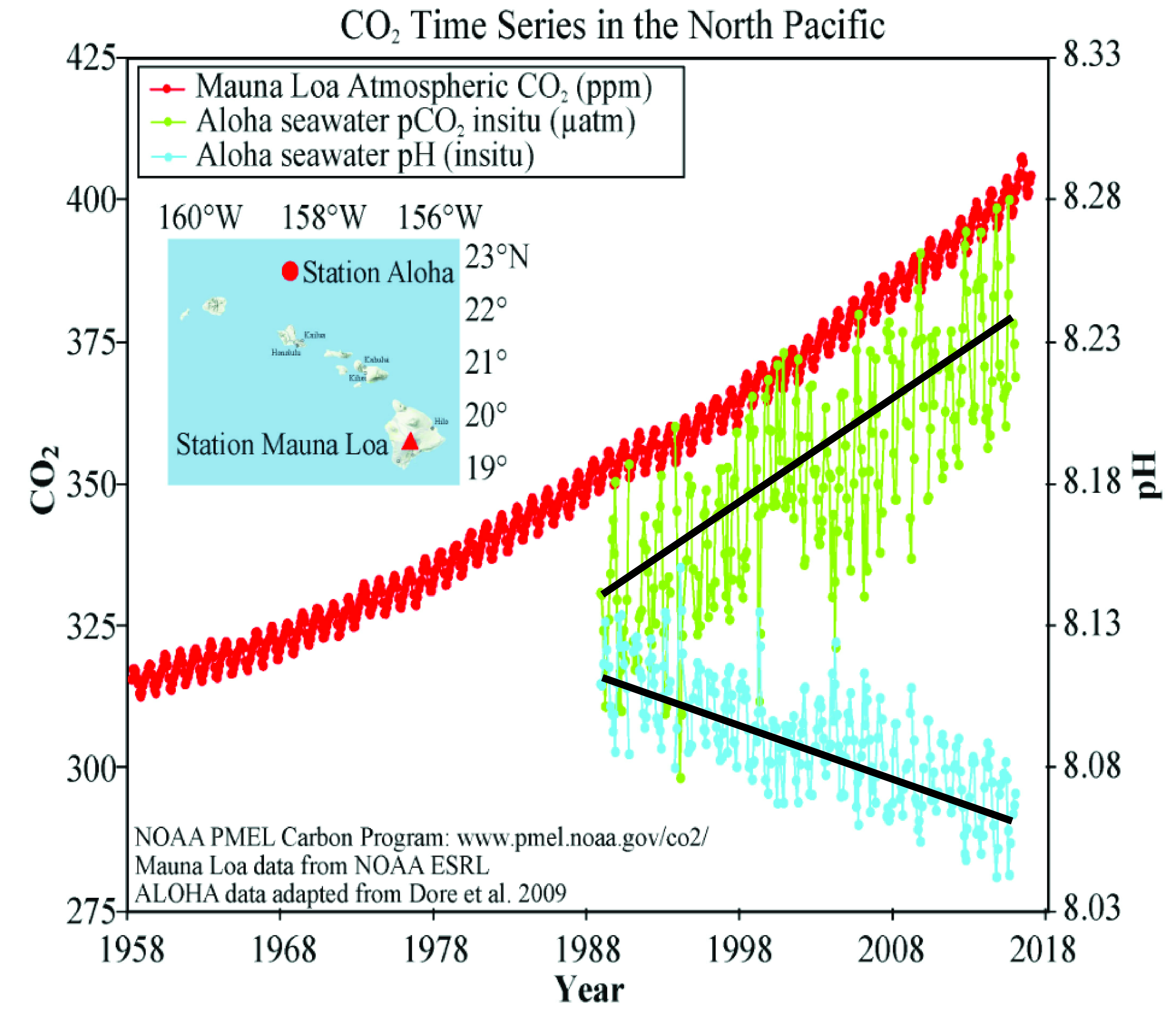 Strongly related to this concept is the observation that the pH of the oceans has decreased about 0.1 pH unit as a result of the atmospheric carbon dioxide increase and is threatening ocean life and the sustainability of coral reefs. [8]  Thus it is possible to argue that because of ocean threats, air and water pollution, wars etc., even without consideration of climate change consequences, fossil fuels need to be phased out.

It is also important for students to think about the high end of practical concentrations.  Most students have a real problem when asked to calculate the concentration of pure water (about 5M) and most will not have thought about the reason why acids generally do not and cannot exceed about 20 M.

Q13.  What is the molarity of pure water (assume the density of water is 1 g/mL)?


Checking and correcting calculations.  For the final topic, the importance of reflecting on the results of calculations, and learning from mistakes needs to be emphasized.  Too often, students obtain results and then move on without questioning the logic of the result and its implications.  As a carefully selected example, when students are asked to calculate the mass of an antimony atom, some will come out with a result of 7.3x1025 g because of the inverted use of Avogadro’s number.  Making this mistake is ok but it is not ok to not notice that the answer is unreasonable as this value is close to the mass of the moon.  Calculations should always be followed by the question:  Does the answer make sense?  For example, values of atomic and molecular mass have practical boundary values and answers out of the logical range should lead to rechecking of the problem.  The simple technique of using insight to determine if the result makes sense can frequently lead to a discovery of a calculation error.  Instructors are often too lax when it comes to encouraging students to learn from their mistakes.  Students need to be encouraged and perhaps required to correct missed problems on tests.  Students have a tendency to merely look at the score and not learn from their mistakes.  Probably more important than a tool for assessing progress in a course, tests should function as learning instruments.  Insight gained from missed problems can go a long way toward making a student more competent in chemistry.  When students realize they have acquired insight in the field of chemistry, they will become the positive learners and will enjoy learning.